Education reform, two words which inspire the public to call talk shows and tell the anecdote about the bad teacher they had 20 years ago; the two words which have encouraged politicians to put public service on the hot seat, reducing or eliminating collective bargaining rights for teachers; two words which lead to passing a national law called âNo Child Left Behindâ (NCLB), the law that Education Secretary Arne Duncan thinks could judge 82 percent of all our nations schools as âfailingâ during the coming year.

I started reading the report âTeacher Quality Roadmap: Improving Policies and Practices in LAUSDâ from the National Council on Teacher Quality. The NCTQ bills itself as âa non-partisan research and policy organization committed to restructuring the teaching profession, led by our vision that every child deserves effective teachers.â (LAUSD is the Los Angeles Unified School District)

The report sets up a goal of making recommendations to improve the Los Angeles public schools. They collected data and did focus groups and interviews.

âThe backdrop to these reform efforts is a $408 million budget shortfall for the 2012 fiscal year which likely guarantees significant teacher layoffs and furloughs for the third consecutive year. Teacher performance, student performance and solutions to the districtâs financial crisis are interconnected to an unprecedented degree. These changes have dramatically changed the make-up of the teacher workforce; the number of teachers in the beginning of their careers has fallen by nearly 15 percent, due to seniority driven layoff policies.â[page1] âCalifornia law requires that districts use seniority as the determining factor in layoffs.â[page 12]

The teachers are dismissed from a position because they are young, new to the profession. The longer a person stays in the district, the more senior they become, and the less prone they are to dismissal for staffing reductions.

When reductions of staff do occur, the young teachers get a break though. They get to go into a pool of teachers that other schools in the district must hire before they (presumably) go outside the district staff to hire a new replacement. It is called the âpriority placementâ list. Unfortunately, the school principals don’t care for the list. 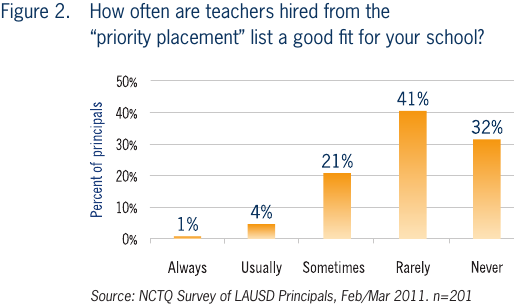 [figure from page 7 of Report]


âWhile teachers are displaced on the basis of seniority and not performance, there is nonetheless a stigma associate with being on the priority placement list. Principals and teachers both commented in focus groups that the excellent teachers who do end up on the list are snatched up quickly. LAUSD principals are frustrated with effectively being forced to hire teachers from this pool. Three-quarters of principals surveyed by NCTQ said that they were unable to hire their teacher of choice because they needed to hire from the priority placement list. Three-quarters of principals surveyed also said that teachers on the must-place list are rarely if ever a good fit for their school.â[page 7]

Here’s where I got hung up.

The phrase âdisplaced on the basis of seniorityâ in the above paragraph doesn’t make it clear, but, typically, displaced staff are the ones with less seniority.

Aren’t we hearing elsewhere that the teachers schools really want are those younger, less experienced teachers? Doesn’t the cry against tenure promote the idea of removing the âdead woodâ, tenured, senior staff so the young teachers can shine?

Just how do these two ideas blend?

The teachers âdisplaced on the basis of seniorityâ are not on the list because they were the poorest performing teachers. The contract under which these teachers work and California state law forces these displaced teachers to be the least senior staff, young ones that the LAUSD hired very recently, that some principal recently thought were the best choice for the school, the district and the students. It is these same recently hired teachers who are displaced, made available to other schools, judged by other principals, judged 73 percent of the time to be ârarelyâ or âneverâ a good fit for their school.

Oops. If a recently hired teacher isn’t a good fit from the must-place list, why was that teacher hired by a different principal for their school? Is one school in the LAUSD that different from another? Isn’t there a one-size-fits-all solution for all the schools in the district?

It sounds as if the NCTQ wants senior staff, presumed to be of higher quality, to be placed into the must-place pool so they can be grabbed up for open positions. The report definitely says that 99 percent of the recently hired, younger, less experienced staff are seen as less than a perfect fit.

The report implied that trying to keep these young, recently hired teachers in the district was forcing principals to make poor choices. These recently hired teachers were apparently less desirable than outsiders, teachers either with more experience, or teachers with even less experience, teachers fresh from the pool of new graduates, teachers whose contracts would cost the district less. I certainly do not know the motivation of the principals. I’m not from Los Angeles and have never met any of these administrators.

It does seem to be a dysfunction in hiring practices. Principals reported that they didn’t like being forced into hiring from the must-place pool. But some other principal hired that young teacher, just a few years back, and that teacher isn’t put on the list because of poor performance, just because of low seniority.

Now, let’s look into the possibility that a change of contract would make schools able to put senior staff onto the must-place, reduction-in-force (RIF) list. The report implies that such a change would be good. Instead of forcing schools to give up their young staff, they could cut older ones. They could cut staff with higher salaries. They could RIF a senior teacher, probably on the basis that the teacher was performing less well than an younger one. Would these higher cost, senior, lower performing teachers be grabbed off the must-place list with more glee than is described for the current process?

Well, actually, the report doesn’t suggest this change. The report suggests that the pilot, charter and school-based management schools schools not encumbered by having to hire off the must-place list at all.

Voila! The solution is clear. Eliminate the must-place list and change the RIF rules. Get rid of the senior, more expensive teachers, disregarding the benefits of experience. Keep all those young teachers who a moment ago were not at all desirable on a must-place list. This isn’t the way the report writes the conclusions, of course. They recombine their analysis later in the report, after showing examples of the other ills of the LAUSD and make their suggestions seem less like just a way to save money and more of a way to reform a broken system.

âAbout this study: This study was undertaken on behalf of the 672,000 children who attend school in the Los Angeles Unified School District.â[page 2]

Another instance of âIt’s all about the children.â

Something tells me that the children are not what the report is really about.

[bracketed page references refer to the report listed below.]

Blog post that got me to read the
report: